Turns out 5+ inches of rain with leaf wetness for 96 straight hours will really do a number on the garden. Zucchini=done for now. I have another planting but it will be a while. Cukes are on their way out already (again we have another late planting due in early September). At least the main block of tomatoes are circling the drain as well, though the cherry tomatoes seem to be faring better as April picked 70 pints over the last two days. I do have a bonus row of tomatoes far from the other tomatoes, so maybe we’ll get a good haul from them.

Tomatoes are the lifeblood/cash cow/bread and butter/moneymaker of farms in the summer, even moreso for this farm as we really specialize in them. In fact, tomatoes alone can make or break a season. I’m putting as much stuff in the ground as I can to try to mitigate the losses I am expecting so hopefully all those lettuces, spinach, carrots and beets I just seeded like all this rain more than the tomatoes do!

The good news is the farm is still standing after 5 inches of rain and with my crew on vacation during the busiest time of the year – there’s really only way to go from here I hope! Really though somehow we have tons of amazing veggies coming in so stock up. I even found a little treat out in the winter squash/flint corn food jungle! 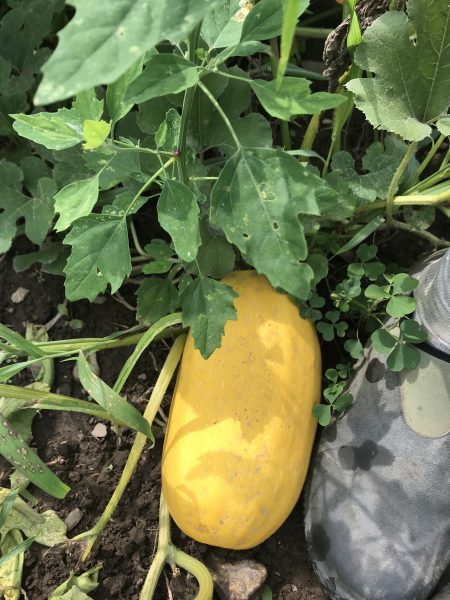 Put your veggie orders in online before 6am Monday. Don’t forget your egg cartons! We’ll have your order available for you to pick-up from 4-7pm Monday on the farm at 64 Potter Hill Rd in Grafton. Pickups are in the long white garage on the left across from the big red barn at the crest of the hill.