Ups and down, call it what you want – it’s been a challenging start to the season. But before we get too far into things, a very exciting announcement: THIS SATURDAY kicks off our market season. We will be at the Douglas Farmers Market from 9-noon with some super fresh organic veggies and plenty of pastured, organically-fed eggs. Hope you can make it! If Grafton is more your style, the Grafton Farmers Market moved to Wednesdays and starts back up 6/29. Same great hours (2-6pm), same great place, and same great vendors, plus a bunch of new ones. Details coming soon.

So it turns out farming is hard. Like, really hard. And not just physically – that part I was prepared for and truly enjoy. There have been a plenitude of literal and expected bumps and bruises, but the those to the ego have been most challenging. I knew it wouldn’t be easy filling Jeff’s boots and striking out on my own, but I sure didn’t know what I was getting myself into. Certainly some of it was my own boneheaded mistakes, incomplete preparation, and taking on far more than I should have in year one. Like not having a working tractor when the first field needed tilled…though she’s purring now thanks to a new friend! Or getting chickens before they had somewhere to hang their hats for the night. Another bump that has been smoothed out!

I wrote this in my head ( a black hole most things never get out of) about a week ago, and my optimistic ending was going to be ‘at least nothing has died yet’. And that’s still 100% true, at the moment. Hopefully he continues to make small improvements, but one of my beloved belties is circling the drain (pictured below in happier times). 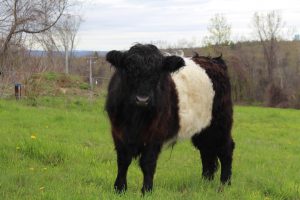 Pastured cattle don’t get sick – if they do, it’s because of a nail or other piece of metal some careless farmer left in the pasture long ago. The same stumped Tufts veterinarian who told me that had no explanation for the blistering 107.2 degree fever this poor guy had (they’re dead at 108, normal is 101.5). Listless and disoriented, we were both amazed he was still eating with such a high fever.

The vet’s best guess was a rare viral disease (bacterial infections don’t cause such a high temp) that cattle can get from sheep. Unlikely considering he’s seen it twice in 15 years and these belties haven’t been exposed to sheep. His fever is down and his eating up, but he’s developed a limp that may or may not be secondary to the infection. Only time will tell how this guy fares.

In brighter news, the garden looks fantastic despite some bumps and bruises they’ve received from this recent relentless wind. If you think it’s windy down the hill, add 20mph and hold onto your hat at the top! I’ve been waiting for the winds to die down before putting in all those sweet and spicy peppers, but most everything else is in the ground. Tomatoes, eggplant, cukes, zukes, squash, broccoli, cabbage, far more greens than you’ll know what to do with, and plenty more. A few new items as well, but we’ll save that for another day.

See you all soon enough!