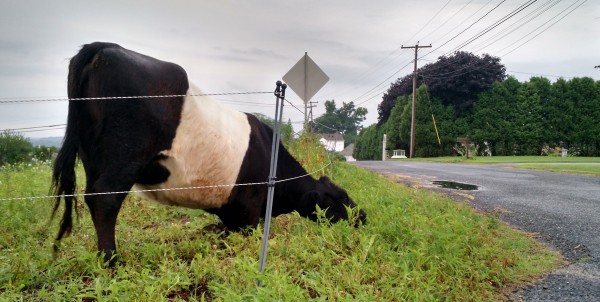 Our Beltie cow, Abigail, has the peculiar tendency to get down on her knees (elbows?) and stick her head under the fence line to eat the grass on the other side.  She’ll even turn her head sideways and stick her tongue way out to get a little extra reach.  With a single-strand electric fence, she can reach a good two feet before the wire gets near her back.  Furthermore, she’ll get within an inch of that wire and I’ve only ever seen her get shocked once in 5 years.  She’ll do this even when there’s plenty of grass inside the fence – I guess she just likes a challenge.  It’s actually pretty helpful, as she does a pretty decent job of keeping the electric fence clear.  What’s really funny is that she never actually breaks out of the paddock, even though she gets most of the way there.  She’s a real class act.

The garden is really starting to pump out great produce.  We’re getting into peak veggie season here in New England, so get into it!  Everything looks good, and we’re still fighting the good fight against the weeds.  Beets are notably absent from the list, as they just can’t seem to cope with the frequent heavy downpours and constantly wet soil.  (Dear Beets, I’m not mad, I’m just really disappointed.  Love, Jeff) 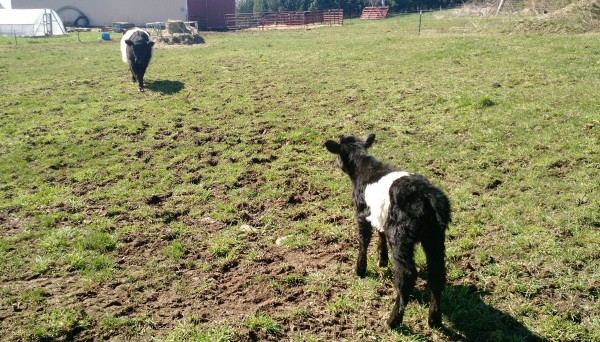 The snow finally melted enough that Paul and I could get out in the barn pasture and fix the electric fence.  So much snow had buried the line, pulled it to the ground in many places, and broken a bunch of the plastic clips that secure the fence wire to the posts.  Paul tells me that the cows were very happy to be free of their winter quarters.  He opened the gate and the whole herd did their spring ritual of galloping around the pasture, with even the old girls bucking and kicking like heifers.  Sadly I missed one of my favorite sights – as I was clearing Phragmites from one corner of the fence, a shard of reed buried itself deep in my thumb, deep enough that a trip to the ER seemed like a good idea.  Talk about an invasive species!  Yukyukyuk.

Thanks to all who came out on Monday to get sausage.  There’s plenty left, but it’s going fast.

Finally, I’m finalizing the details this week for this year’s Potter Hill Pastured Pork CSA.  Please let me know if you’re interested, and I’ll send you an order form as soon as it’s finished. 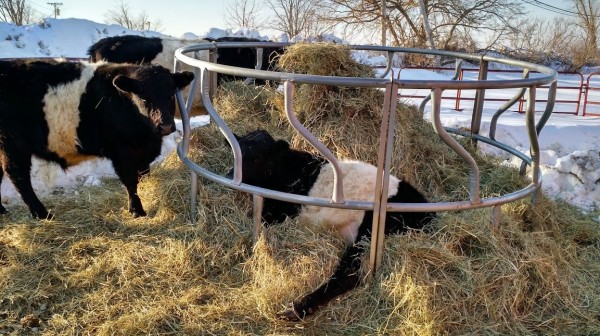 Ah, just look at that pretty girl, lounging in a pile of food.  That there heifer in repose be the beeeeyootiful Betty Rose.  So much sass and just enough class.  She’s Abigail’s girl, hence the good looks – you know she doesn’t belong to Lois.  Her daddy was a Dexter bull, so that means she will probably be petite her whole life.

I’m really interested in what good might come from crossing the small breeds (i.e. Dexters, Lowline Angus) with hearty Scottish and English breeds like Galloways and Devons.  With grass-fed beef, we want animals with good carcass yields that efficiently convert grass to mass.  We don’t really need to hang the biggest steer on the block.  (One of the USDA auction reports down in PA last week listed a slaughter steer that weighed over 1700 lbs on the hoof.  Holy what?!?!  Looks like someone decided to take Paul Bunyan’s ox to the abattoir.)  The proof is in the pudding, of course, but these very intriguing numbers come from the Lowline Angus website. 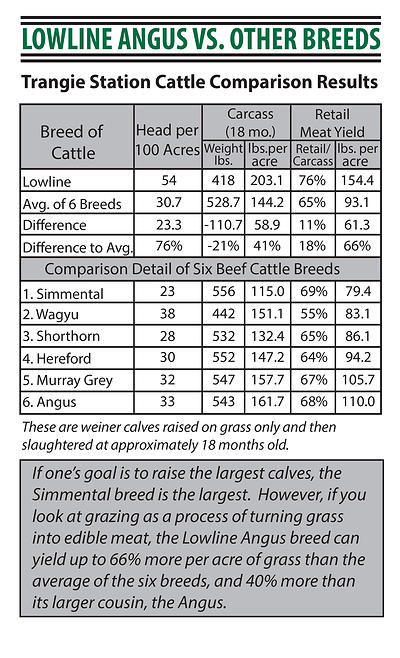 Two things to note: 1) Stocking rate is almost double the average of 6 other large/medium-framed cattle breeds.  2)  Retail Meat Yield for small cattle is 66% higher than the average of the 6 other breeds.  Also consider that these small cattle have 1/3 the nutritional requirements of larger animals, although that seems like a very low number and might be Lowline voodoo.  Maybe someone can do the math for me, but 66% more yield per acre seems like a good thing, even if you’re feeding twice the number of animals one-third of the feed.

Busy morning today.  Up to Tufts to grab a round bale for the cows, but now they are all set for the next few days, at least.  Paul and I spent some time trying to rake the snow drift off of the barn roof, to make room for more coming.  Looks like some snow – just a bit – this weekend, but hey, at least it will be mixed with some rain.  And then possibly some more mid-week, but we’ll have to wait and see how that plays out.  One thing is certain – this year, we’re going to have one heck of a mud season.  Might have to invest in a pair of bog waders just to get anything done during the month of April.  But spring will come, one way or another, and we better get ready.  Time to get the seed order finished, and to start tracking down some animals to stock our pastures.

More snow may be in the forecast, but it looks like we are in the clear for Monday.  Plenty of carrots, beets, and celeriac to go around, and still a decent selection of beef and pork. 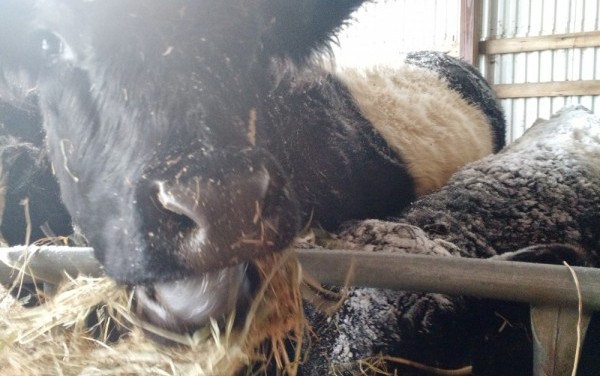 I went up to feed the cows on Saturday afternoon, around 5:00pm.  Normally, this is an incredibly unremarkable experience.  Cows waiting impatiently in the barn for their dinner, bellowing at me as I get out of the truck.  Hay in feeder, cows munch munch huff moo munch, back in truck, go home.

However, this time, instead of cows waiting for me in the barn, I found the corral gate wide open, cows grazing in the neighbor’s yard like it was springtime, and other neighbor Zach waiting in the road looking a little unsure of what to do next.  Apparently, one of the cows (I suspect Abigail) figured out how to unlatch the gate and they had been on a little mission around the neighborhood to find something green to eat.  One of the neighbors, not having a lasso handy and unsure of what else to do, called the Grafton Police Department.  The officer who came up the hill, presumably also lasso-less and not knowing what else to do, went to Zach’s house.  And so Zach told the officer, “Oh, the cows are out? OK, thanks.  Don’t worry, I work here, I’ll take care of it.”  Nice!  Anyway, Zach called Paul, Paul wrangled Dave, and I showed up just in time.  After an hour of pursuit and cajoling, and after setting up some road blocks and temporary fencing, we got the cows back where they belong.  And now there’s a chain on the gate.